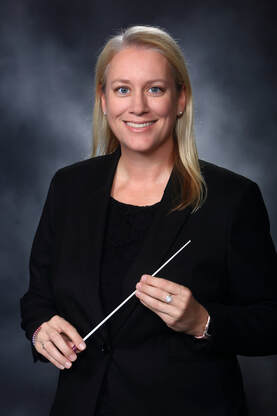 Monica (Crew) Leimer was appointed Director of Bands at DeLand High School in 2019. Ms. Leimer holds both a bachelor's degree in Instrumental Music Education (Magna Cum Laude, 2001) and a master's degree in Music Education (2012) from the Florida State University. While at FSU, Ms. Leimer was a member of the Marching Chiefs, Symphonic Band, Wind Symphony, Concert Band, and the Chiefly Brass Pep Band. She studied conducting with Patrick Dunnigan and Richard Clary and flute with Charles DeLaney, Linda Pereksta, and Karen Haid. Ms. Leimer is highly involved with the Florida Bandmasters Association and the Florida Music Educators Association, having served on several committees as well as the FBA State Executive Board. She keeps an active schedule as an adjudicator and clinician throughout Florida and Georgia. Bands under Ms. Leimer's direction consistently receive Superior ratings at FBA District and State Music Performance Assessments and have received prestigious performance opportunities such as the National Band & Orchestra Festival at Carnegie Hall (2019 & 2022) and the London New Year's Day Parade (2020). In 2019, Ms. Leimer founded the Florida Female Band Directors Network with the mission of creating a safe place for women band directors in Florida to find camaraderie, mentorship, support, and empowerment.

Ms. Leimer previously served as the Director of Bands at Lake Nona High School for 6 years and was a band director in the Tallahassee area for 12 years before that.  She holds memberships in the Florida Bandmasters Association (FBA), Florida Music Educators Association (FMEA), the National Association for Music Education (NAfME), the National Band Association (NBA), and the Women Band Directors International (WBDI). She has previously served on the Board of Directors for the FSU Marching Chiefs Alumni Association as well as the Volunteer Service Team for Alpha Gamma Delta International Women's Fraternity. She currently resides in DeLand with her son James (a current FAMU band member and DHS Band alumni), daughter Madison (a current DHS band member), and their cats - Elsa, Molly, Percy, & Dmitri. 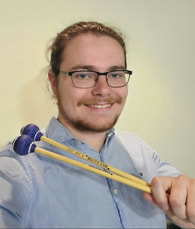 Angelo Theofanous was appointed to the percussion staff at DeLand High School in 2022. He graduated from New Smyrna Beach High School as Drum Captain for three years. He played an active role in the jazz band, symphonic band, combos, and percussion ensembles, holding numerous superior-rated medals at State Solo and Ensemble. In his freshman year of high school he participated as a charter member of the WGI A-Class group - Infinity 3 - as the front ensemble synth player receiving a gold medal at FFCC and silver medal at the 2016 WGI Championships. After graduating from NSBHS, he returned to teach as the percussion instructor there for 2 years and at New Smyrna Beach Middle School for 1 year.
​
Angelo is a senior at Stetson University in DeLand, Florida, currently working on his Bachelor of Music Performance in Percussion under the direction of Mr. Daniel Johnson. He works for Mr. Johnson as the Percussion Assistant and is a lessons teacher for the Community School of Music. Angelo’s aim is to share the knowledge and experience as well as the love and passion for music he has with not only his students, but anyone willing to give music a shot. 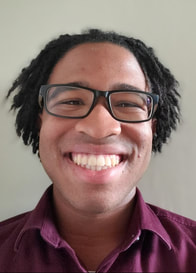 Demetrius Galindez Jr. was appointed to the percussion staff at DeLand High School in 2022. He grew up in Casselberry, Florida and attended Lake Howell High School where he was a member of The Silver Regiment (marching band), where he played marimba and vibraphone. Throughout his 4 years, he earned a plethora of superior medals as both a soloist and an ensemble member at Solo and Ensemble performances, and he helped teach the young musicians at South Seminole Middle School. Within the last two years of his time at Lake Howell, he was awarded the role of being the Front Ensemble Captain.

To further pursue his passion for music, Demetrius now attends Stetson University with plans to graduate with a Bachelors in Music Performance in 2025. 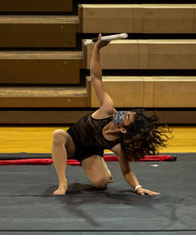 ​Aaron Dalusung was appointed Color Guard Director at DeLand High School in 2021. Aaron attended DeLand High School, where he performed in the band program playing the clarinet and participating in guard. He later switched fully into colorguard his senior year, finishing out his high school guard career with a bronze medal at FFCC Championships. He also received superiors in 3 solos for FBA State Solo & Ensemble on rifle, flag, and dance. Aaron's passion for guard performance continued to grow as soon after graduating high school. He was a performing member of the Jacksonville University Independent A winterguard in 2019 and 2020. During the 2019 season, JU Independent made its way up to Dayton, Ohio to perform at the University of Dayton Arena and ending the season as a WGI Finalist. JU Independent placed 8th overall in Independent A class. In the year 2021, Aaron marched as a member of UCF Pegasus World, which remained first place throughout the season.

Since high school, Aaron has taught and choreographed for other schools including DeLand High to ensure that students feel the love and passion of being a strong, mature performer. He was born in Guam and moved to DeLand in 2005 where he currently resides with his family. Aaron is a student at Daytona State College currently working towards his Associate of Arts degree. 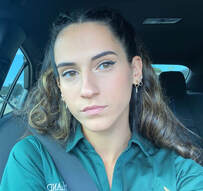 Lyerra Hernandez was appointed to the guard staff at DeLand High School in 2021. She was born and raised in DeLand and now resides in Deltona, FL. Lyerra attended DeLand High School, where she was part of the colorguard for all four years. Lyerra performed as a member of the Jacksonville University Independent A class winterguard in 2019 and 2020. At the 2019 season, she got to perform at the University of Dayton Arena and ended the season as a WGI finalist with JU Independent placing 8th overall in A class. In September of 2020, she received her Associates of Arts Degree from Daytona State College and is currently working towards her Bachelors in Business Administration with a concentration in management with plans to graduate in 2022. 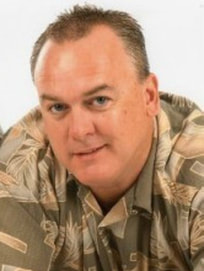 Kevin Griner was appointed to the band staff at DeLand High School in 2019.  Mr. Griner studied Business Management and Marketing at The University of North Florida.  He has served as an entertainment performer and stage manager for the Walt Disney Company for over 24 years.  He toured as a Disney Entertainer and worked for 12 months on board the Big Red Boat representing Disney.  Kevin wrote and created the educational auxiliary workshop "Auxiliration" for the Disney Magic Music Days, in addition to hiring and training all color guard clinicians for the workshop.  Kevin is a color guard adjudicator for Heritage Festivals, OrlandoFest, and Festival Disney Music Competitions.  He also serves as an active color guard adjudicator for the Florida Bandmasters Association and as a winter guard equipment judge for the Florida Federation of Judges Association.

Mr. Griner currently serves as the Color Guard Director for the University of Central Florida Marching Knights and WGI World Gold Medalist Pegasus Winter Guard.  He is highly sought after as a color guard director and designer for numerous outstanding high school visual programs.  In 1991 he was a member of the bronze-medalist Winter Guard program - Alliance of Miami and is a 30 year member and instructor in both the Winter Guard International and Drum Corps International organizations. 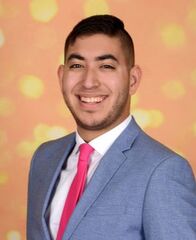 Jean Diaz was appointed to the band staff at DeLand High School 2019. Originally from San Juan, PR, he currently resides in Orlando, FL. He attended Lake Nona High School where he was a member of the Jazz Band, Marching Band and the Wind Ensemble. Jean started playing euphonium when he was in middle school and kept playing until his junior year in high school when he also began playing bassoon. Jean is recently graduated from Valencia College and plans to study Political Science and International Relations at the University of Central Florida starting in the Spring 2021 semester. Jean is also an avid Disney fan and currently serves as a food & beverage cast member at Disney Springs. 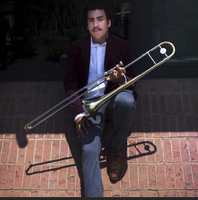 Garrett Gauvin Caraballo is a freelance musician and educator in the Central Florida region, specializing in a wide range of genres. He was appointed to the band staff at DeLand High School in 2021 as the trombone instructor. As a recent graduate of the University of Central Florida, Mr. Gauvin has worked with numerous world-renown artists, such as Conrad Herwig, Jay Friedman, and Kristian Dentley, among others. During his time at UCF, Mr. Gauvin also had the pleasure to record 3 albums with the school of music, Including 2 with the Flying Horse Big Band, (Good News, 2018 and Florida Rays, 2019) as well as a live recording at the Dr. Phillips Center Walt Disney Theatre with the UCF Wind Ensemble (Zodiac Concerto, Featuring Bill Caballero and Roger Oyster, 2018). Also with the performing groups at the University of Central Florida, Mr. Gauvin has had numerous opportunities to premier new arrangements and compositions, as well as perform in numerous conferences. These include the FMEA convention in Tampa, Florida, the CBDNA Southeast Conference at Northwestern State University, and the Festival Internacional de Trombones de Costa Rica, in Puntarenas, Costa Rica. As a professional, Mr. Gauvin performs regularly across the Central Florida area, including events ranging from weddings, dance halls, and traditional concerts. Mr. Gauvin has played in several festivals with artists such as Viti Ruiz, and is a mainstay in several bands locally, such as the Rico Monaco Band. 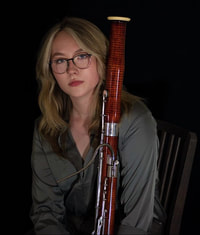 Brianna Pols was appointed to the band staff at DeLand High School in 2021. She grew up in Lake County, Florida, where she graduated from Tavares High School in 2019. Brianna was a member of the “Big Red” marching band, jazz band, symphonic band, and wind ensemble. She served the band in various leadership roles, including section leader and drum major. Brianna started playing bassoon in 6th grade, and she has been involved in music ever since. Throughout high school, she studied with Stetson’s current bassoon professor, Mr. Gabriel Bergeron-Langlois. She attended Stetson’s Double Reed Workshop for several years and during her time as a camper, she won the Young Artist Competition. She consistently earned superior ratings at both district and state level Solo and Ensemble and won the Lois Ridge Encouragement Award for her solo performance in the annual Harold Schwartz Music Scholarship Competition in 2019.
​
Brianna currently attends Stetson University and teaches private students in Central Florida. She has a passion for bassoon performance/pedagogy as well as general music education, and she hopes to teach high school band after graduating. Brianna plans to graduate with a Bachelors in Music Education in Spring 2023.
Jarobi Watts (rhythm section instructor)​... (bio coming soon)